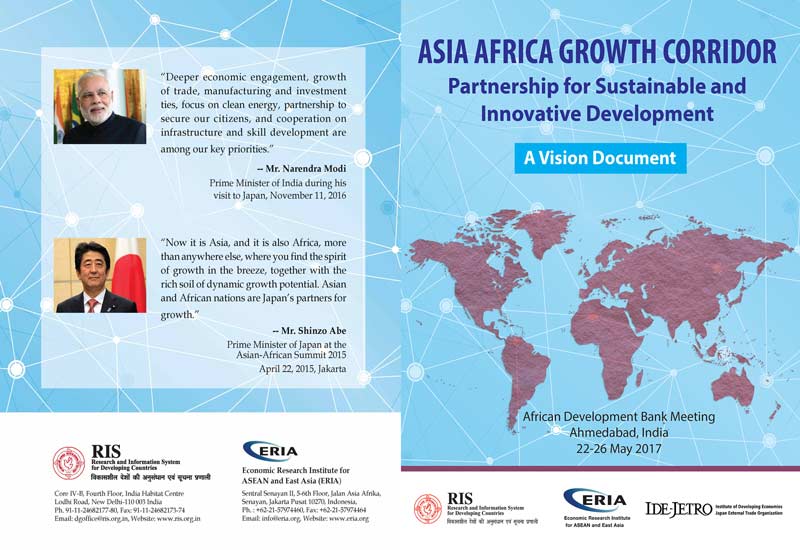 The idea of Asia Africa Growth Corridor (AAGC) emerged in the joint declaration issued by Prime Minister Narendra Modi and Prime Minister Shinzo Abe in November 2016. The AAGC will envisage people centric sustainable growth strategy, details of which would be evolved through a process of detailed consultations across Asia and Africa, engaging various stakeholders.

The AAGC will be raised on four pillars of Development and Cooperation Projects, Quality Infrastructure and Institutional Connectivity, Enhancing Capacities and Skills and People-to-People partnership. The centrality of people to people partnership would be the unique feature of this initiative. The strengths of AAGC will be aligned with the development priorities of different countries and sub-regions of Africa, taking advantage of simultaneous homogeneity and heterogeneity among them. This would be undertaken to improve growth and interconnectedness between and within Asia and Africa for realizing a free and open Indo-Pacific region.

The AAGC will give priority to development projects in health and pharmaceuticals, agriculture and agro-processing, disaster management and skill enhancement. The connectivity aspects of the AAGC will be supplemented with quality infrastructure. The AAGC led growth in Africa and Asia will be responsive to the collective commitment for the Sustainable Development Goals (SDGs). The AAGC Vision Study will use Geographical Simulation Model (GSM) to bring out the economic gains for Africa through its integration with India, South Asia, Southeast Asia, East Asia and Oceania. The AAGC will contribute to develop institutional mechanisms and models for connecting businesses, people and think tanks that represent, and contribute to, the integration efforts in Asia and Africa.

The Research and Information System for Developing Countries (RIS), New Delhi, the Economic Research Institute for ASEAN and East Asia (ERIA), Jakarta, and Institute of Developing Economies (IDE-JETRO), Tokyo, have developed the Vision Document based on consultations with Asian and African think-tanks.